Alkenes are hydrocarbons with double bonds between 2 consecutive Carbon atoms

Alkanes are saturated compounds. there is no possibility of adding more atoms to the molecule.

Structure of the –C=C– bond

The electrons in the π (pi) bond are delocalized (they belong in the electron cloud at the top and underneath the carbon carbon σ (sigma) bond, so they are more susceptible to the attack of electrophiles.

They can react under certain conditions in the following reactions:

A) Addition  Reactions of

Adding Hydrogen to the double bond

We will work with ethene but the same reaction occurs with any alkene.

Ethene reacts with hydrogen using a nickel catalyst at around 150°C.

The product of this reaction is ethane.

For this reaction or similar you should remember

This reaction is used to hydrogenate vegetable oil to produce margarine.

When the hydrogenation is PARTIAL we will have a PARTIAL HYDROGENATED FAT. Having still some double bonds, leads to two types of fats, CIS and TRANS.

Trans fats are harmful to the organism. We cannot process them and they increase the levels of BAD cholesterol in blood. Be careful when you eat something. Read the labels and be sure you do not eat TRANS FATS.

The process of hydrogenation is made using a solid catalyst of Nickel. The step by step is shown below:

Margarine is made by adding hydrogen to the carbon-carbon double bonds in animal or vegetable fats and oils. These are called Hydrogenated fats

Not all margarine is made by hydrogenation.

Animals and vegetable oils have similar molecules. If it is liquid at room temperature, they are called oils. If they are solid, we call them FAT.

The higher the number of carbon-carbon double bonds, the lower the melting point, because their Van der Waals forces are weaker.

If there aren’t any carbon-carbon double bonds, the substance is said to be saturated.

Here you  have an example of a saturated fat structure, what we normally call triglyceride or fat molecule

Ethanol is manufactured by reacting ethene with steam. The reaction is reversible.

Removing the ethanol as it forms shifts the equilibrium towards the formation of more alcohol.

You need to be careful where the -OH and where the -H of the water will add to the double bond in the case that the molecule is not symmetric.

That’s why in the case of propene, you will get propan-2-ol rather than propan-1-ol.

Adding a halogen to the double bond ends in a dihalide.

This reaction’s mechanism is in the PowerPoint presentation about

Bromine, present in bromine water, reacts with the double bond, forming the dihalides, the orange-brown color from Bromine disappears and the solution becomes colorless.
Ethene, as all alkenes, decolorize bromine water by producing 1,2 dibromoethane

The same as in the addition of Steam, the hydrogen will be added to the carbon in the double bond that already has more hydrogens.

If sulphuric acid adds to an asymmetrical alkene, like propene, the same mechanism applies to it. One of the hydrogens in the acid will attach to the carbon with more hydrogens and the Hydrogen sulfate left behind will bond with the carbon with less hydrogens. The name is alkyl hydrogensulfate

This is in line with Markovnikov’s Rule, again…

alkyl hydrogensulfates react with water to form the alcohol and recover the sulfuric acid.

The position of the -OH group will replace the Hydrogen Sulfate and the Hydrogen will convert the hydrogen sulfate into sulfuric acid.

“The oxidation process is losing electrons or gaining oxygen, in this case, the oxygen gained is represented with [O], meaning, oxygen is added to the compound that comes from the oxidizing agent”

The resulting color is different under acidic or alkaline conditions.

Chemistry of the reaction

We’ll look at the reaction with ethene. Other alkenes react in just the same way.

Manganate(VII) ions are a strong oxidising agent, and in the first instance oxidise ethene to ethane-1,2-diol (old name: ethylene glycol).

Looking at the equation purely from the point of view of the organic reaction:

The full equation depends on the conditions.

Under acidic conditions, the manganate(VII) ions are reduced to manganese(II) ions.

Under alkaline conditions, the manganate(VII) ions are first reduced to green manganate(VI) ions . . .

Alkenes can act as monomers because they have a double bond:

Examples of polymers and their uses

Polymer molecules can have branches coming off them, which change the properties of the polymer.

Comparison of two types of poly(ethene)

Plasticisers are substances that let the polymer molecules slide over each other more easily. This makes the polymer softer and more flexible. For example, poly(chloroethene) or PVC is a hard polymer. Unplasticised PVC, usually called uPVC, is used to make pipes and window frames. PVC with plasticisers is soft and flexible. It is used for floor coverings, raincoats and car dashboards.

Poly(ethenol) is a polymer that dissolves in water to make slime. The viscosity of the slime can be changed to make it thick or runny by varying the amount of water. 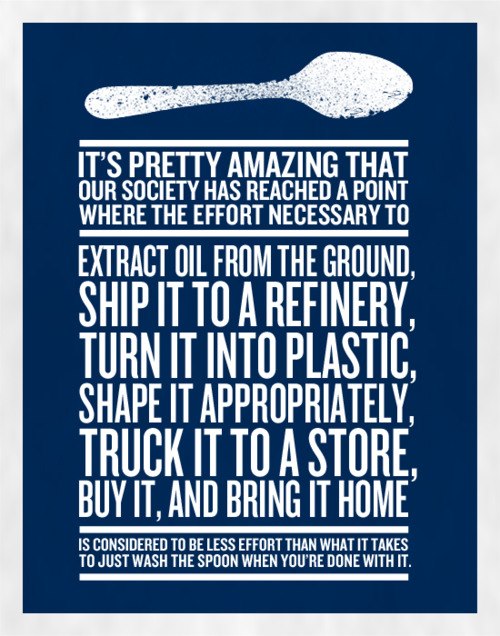 There are two types of polymers: natural and synthetic

The ones that are man-made. Nylon, polystyrene (Styrofoam), polyesters, polyamides, PVC etc.

It is the process of producing a polymer. There are two types of polymerisation

Many molecules of Ethene

Polyethene (in presence of a catalyst and heat & pressure)

All monomers join up forming a small molecules that are released in the process. Most of the time the molecule is water or a hydrogen halide. (Hydrogen chloride for example)

Many molecules of Aminoacid

•during polymerisation, an alkene undergoes an addition reaction with itself.
•All the atoms in the original alkenes are used to form the polymer
•Long hydrocarbon chains are formed 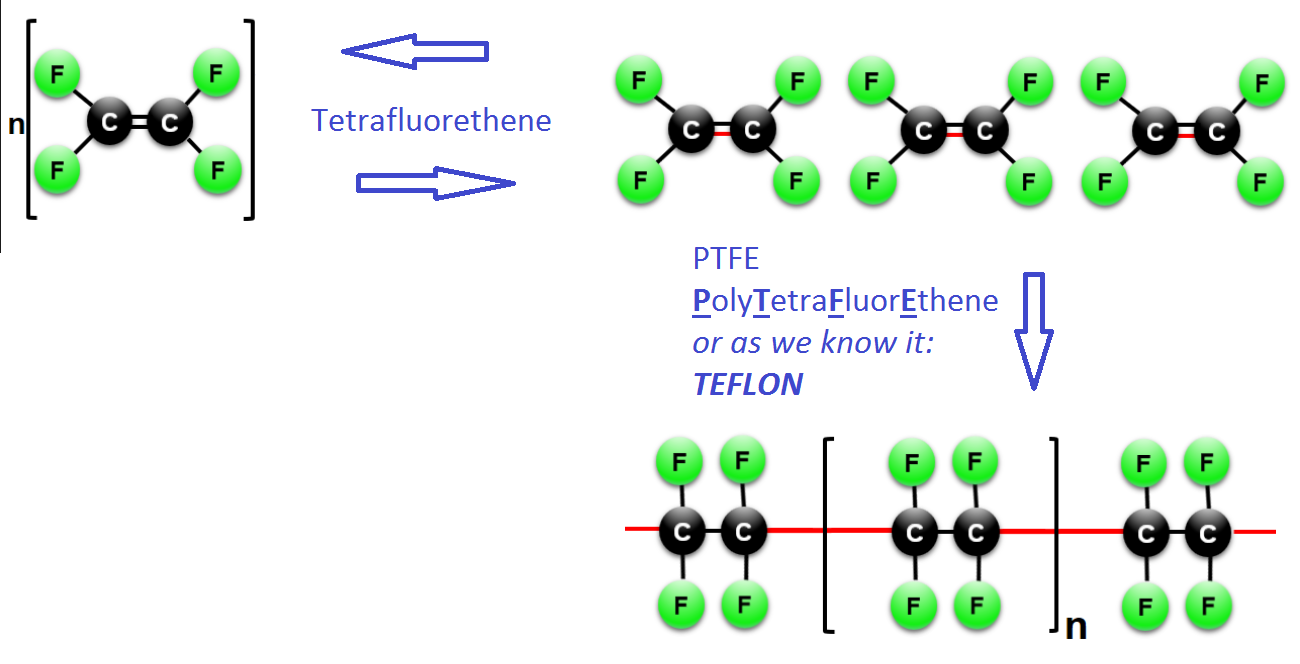 Important: You should recognize the main functional organic groups used in polymerization

These functional groups can be in both sides of the molecules or combined.

In the condensation Polimerisation, different monomers get together and one of the following molecules will be produced (H2O or HCl)

We will study only 4 types of condensation polymers:

The monomers for the condensation polymers we will study are as follows: 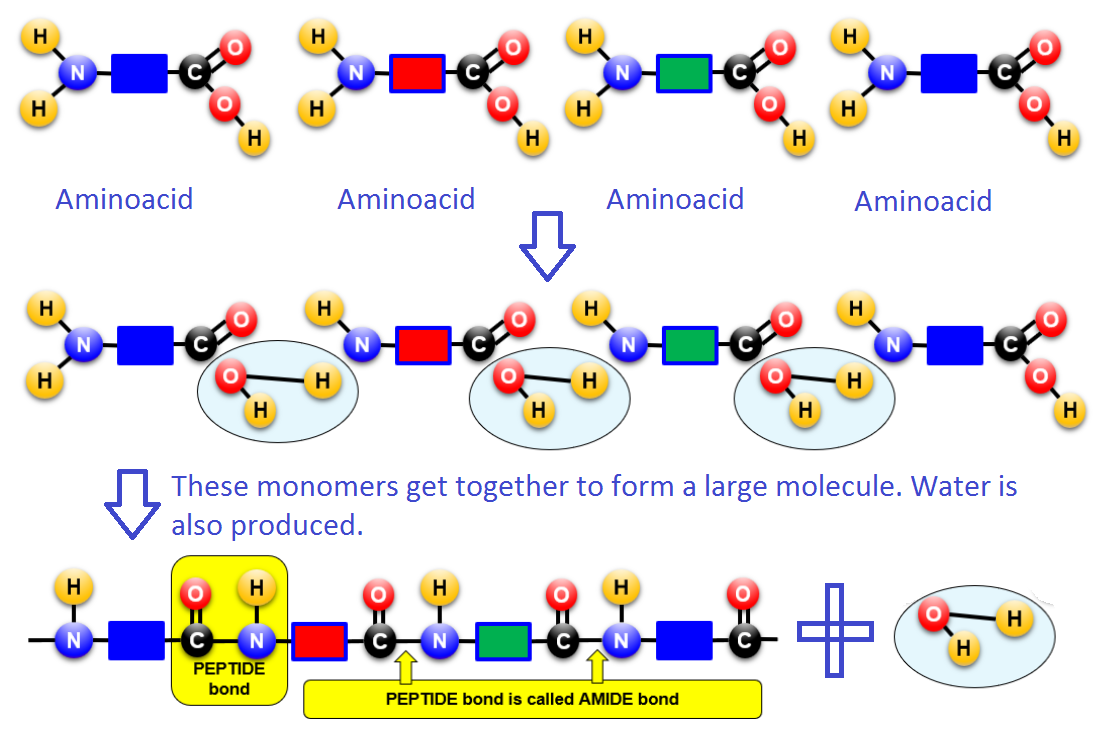 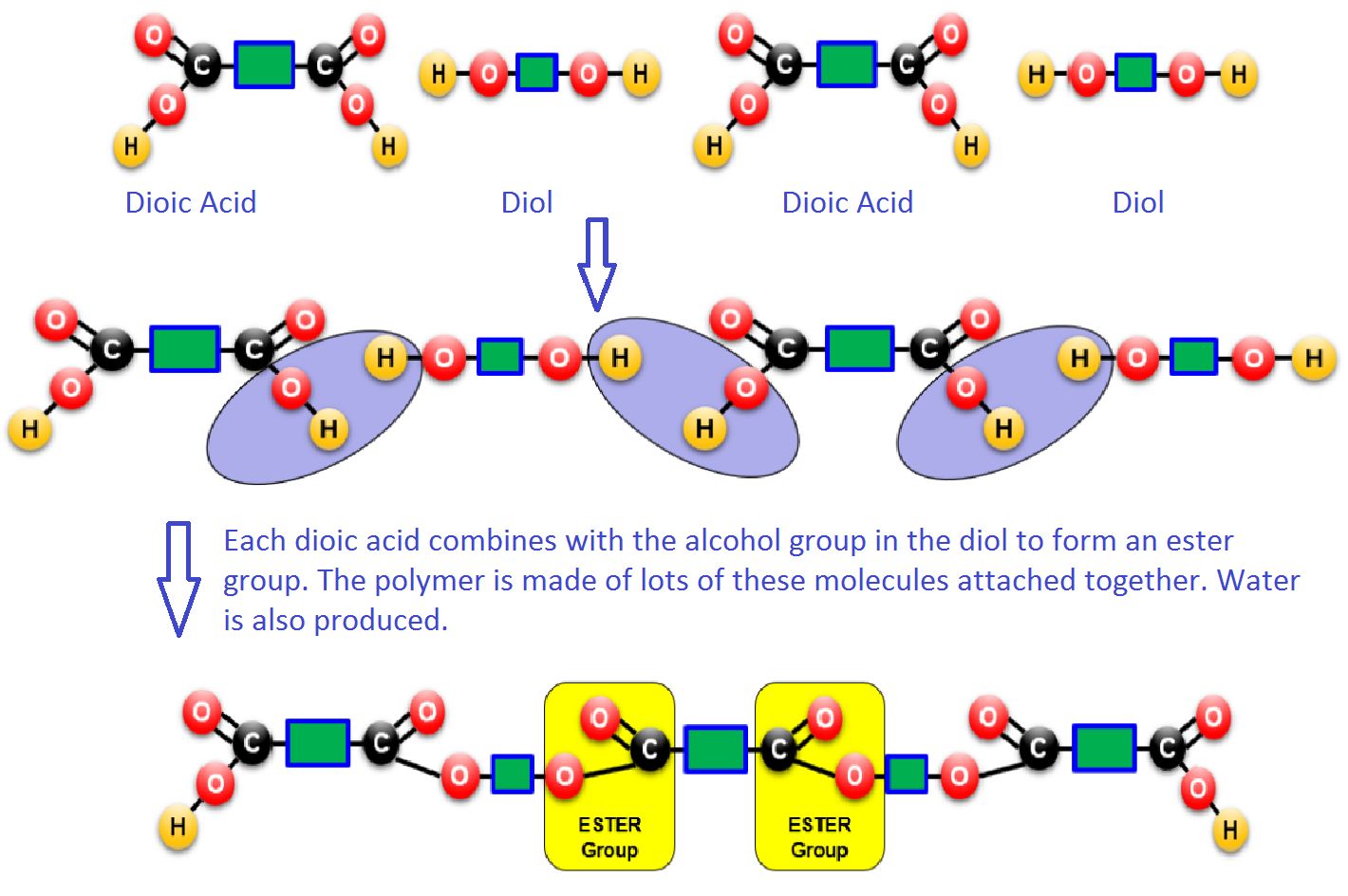 Nylon or Polyamides are groups of diamines and dioic acids. Both together form amide bond