Review from AS
Lattice Enthalpy and Entropy
ENTROPY
Kinetics
Electrochemistry

Water molecule works like a magnet. It has a negative pole and a positive pole. That’s why we
say that water is POLAR. If we could “brake” the water molecule, we would obtain the following compounds: H+ and OH–

Sometimes you will see the equation in a different way:

Examples of the most common acids and their uses:

Although acidic oxides do not have protons, they react with bases to produce water. This is a special kind of neutralization process.

Examples of the most common bases and their uses:

Metal oxides are also bases.
When metal oxides react with acids, they form water and salt. this is a special kind of neutralization reaction.
An example of these bases is Calcium oxide (lime) is used to neutralize the acidity in the soil.

AMMONIA, A SPECIAL BASE:

Most bases release OH- in solution. Ammonia does not have OH- in the formula but it acts like a base. This is because it reacts with water releasing OH- ions.

Neutral substances are the ones that do not posses the characteristics of bases or acids.
Water is a neutral substance. It means that water contains the same number of protons and hydroxide ions, so it is NOT an ACID or a BASE. It turns Universal Indicator paper green (no effect on litmus paper) and has a pH of exactly 7.

Indicators are chemical dyes that have different colors when they are placed in acidic and alkaline solutions. Litmus is one of those indicators: it turns red in acid and blue in alkali.
Universal Indicator (pH paper) is a special indicator. It has many colors. It not only tells you if the solution is acidic, neutral or alkaline, but it tells you how strong the solution is.
Using Universal Indicator and a chart you can read off a number – the pH number.

The pH number usually ranges from 0-14.

THEORIES OF ACIDS AND BASES

Neutralization is the process in which hydrogen ions and hydroxide ions react to produce water.

Limitations of the theory

Ammonia does not have OH– ions and nevertheless it present properties of bases.
This theory is not broad enough to cover all basic substances that do not  have OH– ions in the formula.  We need a better theory.

The Bronsted-Lowry Theory of acids and bases

The Bronsted-Lowry theory does not say that the Arrhenius theory is wrong. It just adds options to it.

Protons do not exist alone, they exist only surrounded by several molecules of water, so instead of writing H+, we represent one proton + a molecule of water as H3O+

When an acid in solution reacts with a base, what is actually functioning as the acid is the hydronium ion.

For example, a proton is transferred from a hydronium ion to a hydroxide ion to make water.

When hydrogen chloride dissolves in water, almost 100% of it reacts with the water to produce hydronium ions and chloride ions.
Hydrogen chloride is a strong acid because it dissociates completely, and we tend to write this as a one-way reaction:

Some acids (including all the organic acids) are weak acids.  This means that the as soon as the acid is dissociated, some of the ions react together to form the acid again. We represent this as a REVERSIBLE REACTION which we represent with a double arrow. (

In general we can represent these acids as HA, where H is the proton present and A– is the ion left when they separate.

In the forward reaction:

In the backward reaction:

The reversible reaction contains two acids and two bases. We think of them in pairs, called conjugate pairs.

When the acid, HA, loses a proton it forms a base, A–.

When the base, A–, accepts a proton back again, it obviously refoms the acid, HA.

These two are a conjugate pairs.

A second example of conjugate pairs

This is the reaction between ammonia and water that we looked at earlier:

You may possibly have noticed (although probably not!) that in one of the last two examples, water was acting as a base, whereas in the other one it was acting as an acid.

A substance which can act as either an acid or a base is described as being amphoteric.

The concentration of protons and pH

1 mole of acid produce 1 mole of protons in solution

if we have a solution 0.1 M of HCl, when it dissociates, it will form a concentration of protons equals to 0.1 M, since per each molecule we have one proton

so the pH will be

If the acid has 2 protons instead like H2SO4. for each mol of acid we will have 2 moles of protons.

1 mole of acid produce 2 moles of protons in solution

You can use the PRE AICE book to answer the following questions. Work will be collected at the end of the period. DO NOT WASTE YOUR TIME.

1. Observe the following picture and answer the questions below:

2. Observe the following picture and answer the questions below:

3. Magnesium sulfate (MgSO4) is the chemical name for EPSON SALTS. It can be prepared in the laboratory by neutralizing the base Magnesium Oxide (MgO) .

4. Aspirin is 2-ethanoyloxybenzoic acid, an organic acid which is soluble in water.

5. Give examples of the uses of acids and bases in the following situations

6. Observe the picture below. Dilute sulphuric acid is reacting with the metal (magnesium) in the conical flask. 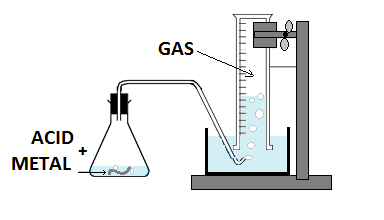